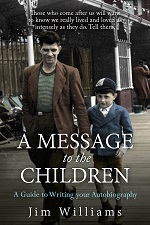 Little Jimmy is five years old and lying in bed at home in Warwick Street, Oldham and the year is 1952. Dorothy Mee has told him the King has died, and next year he’ll see the Coronation and get a souvenir mug and a case of chicken pox. His mother, Nellie, is fretting about the state of the roof and owes Machin the builder (whose daughter has a “lazy eye” and a good one covered with a pink patch over the lens of her spectacles) seventy-five pounds. It’s the largest bill Nellie will ever have to pay and she remembers the exact amount fifty years later.

Most of this is bye the bye. What’s important is that Jimmy has been to school and enjoyed himself at his artwork. He’s come home excited and now he’s lying in bed and a picture forms in his mind.

It’s of three red tulips. They have green stalks and green leaves and grow in a brown pot. The background is a vivid yellow. Years later Jimmy discovers Van Gogh’s Crysanthemums and can see that Vincent has something of the idea. But they’re a pallid affair compared with Jimmy’s tulips. Nothing can capture the vivid scarlet of the blooms, the deep emerald green, the vibrant yellow, the radiance of the whole. No other image can generate the same excitement because none will be so fresh as the one he has at the age of five.

Jimmy draws with sticks of hard wax crayon that come in a cheaply printed carton. Nellie buys them together with colouring books on Oldham Tommyfield market. She often takes Jimmy there. The bus fare is a penny each way, but they sometimes walk. The market also sells surplus school exercise books made for the Gold Coast colony. On the back of the cover they have extraordinary tables of weights and measures, full of troy ounces and rods, poles and perches.

At school Jimmy is also allowed to play with Plasticine. He loves the red and the white, but the colours are gradually absorbed into a muddy green. Yet on one occasion he comes by them in their pristine form and makes a figure with a red jacket and white breeches, which he says is Dick Turpin, the highwayman. Somewhere he’s seen a picture of a redcoat soldier.

Who can say why history interests him? He learns to read a collection of Arthurian legends and Norse myths and will always know that Loki killed Balder with a piece of mistletoe. He swaps his most valuable soldiers with Alan Hutchinson, his best friend, so he can have one figure in a Napoleonic uniform. Nellie is furious and reverses the exchange. She has no feeling for history at all, even though she does remember the amount of Machin’s bill when it’s become a part of history.

The morning after his wonderful dream, Jimmy arms himself with wax crayons and sets about realising it on paper. There it is: red tulips, green stalks and leaves, brown pot, yellow background.

‘That’s nice, Jimmy,’ says his teacher, and it is nice. She gives him a gold star and writes “very good” in red ink.

The truth is that the dream of red tulips can’t survive its translation into this world. The problem isn’t a technical weakness in the drawing or the colouring, but in the very fact that the image has been taken from the realm of wonders. Jimmy will no more forget the palpable disappointment at the failure to realise his vision than he will forget the dream itself

But he remains grateful that he had the dream.

I’m in a bar in Abu Dhabi with Fabulous Fred Day, and Billy Brooks is telling stories about Ben Ley, who died of a heart attack while swimming. Ben was famous for mangling his words. Billy is from Liverpool and has a deep voice of gravel and spent cigarettes.

This book is about autobiography: how I wrote mine, which you’re reading, plus a few ideas about how you might write yours. I’ve begun these notes with a tale about Ben Ley because it illustrates the natural way in which people tell stories. Read it again and notice how sparse the details are. We don’t know when or where the wedding took place, or when or where Ben told his story to Billy. For that matter you don’t know – because I didn’t bother to say – when it was that Billy repeated the story to me. The fact that we were in Abu Dhabi is immaterial: I might have said Dubai or Derby for all the difference it would make. That little detail is just a trick of story telling.  By locating the incident in real space, I persuade you it really happened – as indeed it did.

Billy Brooks is a funny man and can tell a dozen tales about his mate Ben fit to make you weep. Fabulous Fred Day is another and in the course of this book I’ll tell you a few more things about him. If you were to ask most people to tell you in their own fashion about someone they know, they’d probably recite a series of anecdotes about the time when X did this or said that, and the order would follow the significance of the stories. It would reflect their humour, their pathos, the light they throw on the human condition, their impact on the lives of other people, and so forth. However it’s very unlikely they’d follow a strict chronology and it would probably be very difficult to assign a date or a place to most of them. And the reason is simple. For the most part Life doesn’t have a plot. It’s just stuff that happens. The point of the Ben Ley story is his habit of chewing up the language. No other detail matters. The point of my story of red tulips is the remembrance of a childhood vision. I don’t recall how it stands in relation to all the other things I did at school (such as being called before the headmistress for peeing in the playground), because that relationship has no significance.

The basis of my approach to writing autobiography is to follow this natural trend of story-telling, setting down incidents that seem to me to be important but without any effort to string them together into a plot. Where I do put the various anecdotes and recollections together, the reason is that I sense a pattern: an outline of a picture of who I am and where I’ve come from; and here and there a touch of colour.

This is the method I recommend to you and which this book sets out to explain.

Buy the book “A MESSAGE TO THE CHILDREN: A GUIDE TO WRITING YOUR AUTOBIOGRAPHY” to keep from Amazon:

You can navigate your way to subsequent and previous blogs below.

How to write your autobiography – A free course – introduction

How to write your autobiography. – Lesson 2  – Nellie

How to write your autobiography. – Lesson 3 – SHINY Jim and Adolf Hitler

How to write your autobiography- Lesson 4. – The Last Cowboy in Wrexham

How to write your autobiography – Lesson 6 – Gents and Gypsies

How to write your autobiography – Lesson 7 Little Jimmy’s Xmas

How to write your autobiography– Lesson 8 – My Holdays