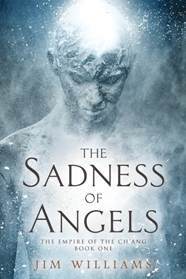 Lord T’ien Huang controls the universe through poetry, telepathy and the violence of his insane Angels. His subjects consider him to be God. Emperor of a universe ruled by the Ch’ang, immortal but not invulnerable, his interest is aroused by Sebastian, a novice monk on the remote and wasted planet of Lu, who can see and speak to God. Should he destroy the boy or toy with him?

Sebastian is rescued from the Lord T’ien Huang’s Avenging Angels by Mapmaker, an ancient Old Before the Fall with a forgotten history of betrayal, and they journey to the snowbound north. They are accompanied by Velikka Magdasdottir, a girl belonging to the Hengstmijster tribe of warrior herdswomen who maintain a veiled harem of husbands.

In the frozen wastes they encounter the remains of the Ingitkuk who rebelled against the Ch’ang in antiquity and lost their witch princess, She Whom the Reindeer Love. Mapmaker knew her when she died half a millennium ago as Her Breath Is Of Jasmine.

Will Mapmaker lead Sebastian, the Hengstmijster and the Ingitkuk to their doom against the Ch’ang? Can Sebastian master his own powers? How will they survive against the Angel Michael, thawed and frozen more times than he can recall, with his power to destroy humanity by the billion?