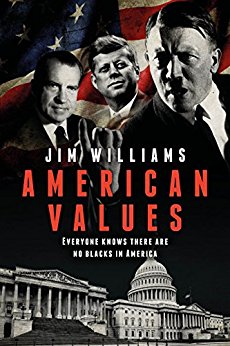 Conspiracies are not meant to be understood.

America in the Fall of 1963. The ageing “Big A” has been President since he beat Roosevelt in 1932 and passed the Defense of American Values Act to establish his dictatorship.
Thirty years on, the United States is locked in a war to conquer South America. Racial minorities are persecuted, homosexuals killed, and African Americans have disappeared from public view. The country is worn-out and dilapidated, and people wait to see who will succeed the Old Man. In high places, Nixon and the Kennedys manoeuvre against each other under the watchful eye of J Edgar Hoover
Harry Bennet is a foreign correspondent for the Manchester Guardian, posted in Washington and treading warily in the political minefield. He is helped by his best friend, Jeb Lyman, but it is a dangerous friendship since Jeb is a high official in the feared General State Police and deeply implicated in the politics of the regime. Yet Harry has to trust him to protect the woman he loves, Maria, whose racial ancestry may not stand up to investigation.
Harry learns of a mystery patient secluded in one of Washington’s hospitals. Following up the lead takes him across the decaying landscape of an oppressed America to Chicago, Las Vegas, Louisiana and Texas.
Ultimately his investigations embroil him in a murderous conspiracy to inherit the Presidency and he finally obtains an answer to the terrible secret hidden behind the public face of American Values.