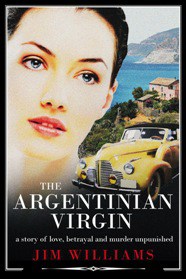 Summer 1941. France is occupied by the Germans but the United States is not at war. Four glamorous young Americans find themselves whiling away the hot days in the boredom of a small Riviera town, while in a half-abandoned mansion nearby, Teresa and Katerina Malipiero, a mother and daughter, wait for Señor Malipiero to complete his business in the Reich and take them home to Argentina.

The plight of the women attracts the sympathy of ‘Lucky’ Tom Rensselaer and he is seduced by the beauty of Katerina. Tom has perfect faith in their innocence, yet they cannot explain why a sinister Spaniard has been murdered in their home and why Tom must help them dispose of the body without informing the police.

Watching over events is Pat Byrne, a young Irish writer. Twenty years later, when Tom has been reduced from the most handsome, admired and talented man of his generation to a derelict alcoholic, Pat sets out to discover the facts of that fateful summer: the secrets that were hidden and the lies that were told. It is a shocking truth: a tale of murder unpunished and a good man destroyed by those who loved him most.

Jim Williams first hit the news when his early novels had the uncanny knack of coming true.The Hitler Diaries was published nine months before the celebrated forgery came out. Farewell to Russia dealt with a nuclear disaster in the Soviet Union months before the Chernobyl incident.Lara’s Child, his sequel to Doctor Zhivago, provoked an international literary scandal and led to his being a guest speaker at the Cheltenham Festival. Scherzo, a witty and elegant mystery set in eighteenth century Venice, was nominated for the Booker Prize. All of his fiction has been published internationally. The Argentinian Virgin was his ninth novel.